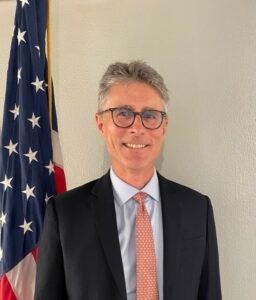 Tim Trenkle has served as Deputy Chief of Mission at the U.S. Embassy in Mogadishu, Somalia, since July 2022. Prior to that position, he worked as Foreign Policy Advisor to the Commander of Special Operations Command Africa (SOCAFRICA), based in Germany from 2018 to 2021.

Mr. Trenkle previously served as Political/Economic Counselor at the U.S. Embassy in Nepal, and Deputy Political Counselor in Thailand. In Washington, Mr. Trenkle was Deputy Director for Maritime Southeast Asia and Special Assistant in the Bureau of African Affairs. Other overseas assignments include tours in South Africa and Mali.

Prior to joining the Foreign Service, Mr. Trenkle was an international trade attorney in Washington, D.C. From 1990-1996, he worked as Legislative Assistant and Director for U.S. Senator Nancy Kassebaum on African affairs and other foreign policy issues.

Mr. Trenkle graduated from Georgetown University’s School of Foreign Service and earned a law degree from the University of California, Berkeley. He speaks French and at one time was also fluent in Thai and Nepali. A native of Kansas, Mr. Trenkle is married to Sheila Roquitte, a USAID Foreign Service Officer, and has two terrific and well-traveled teenage children.