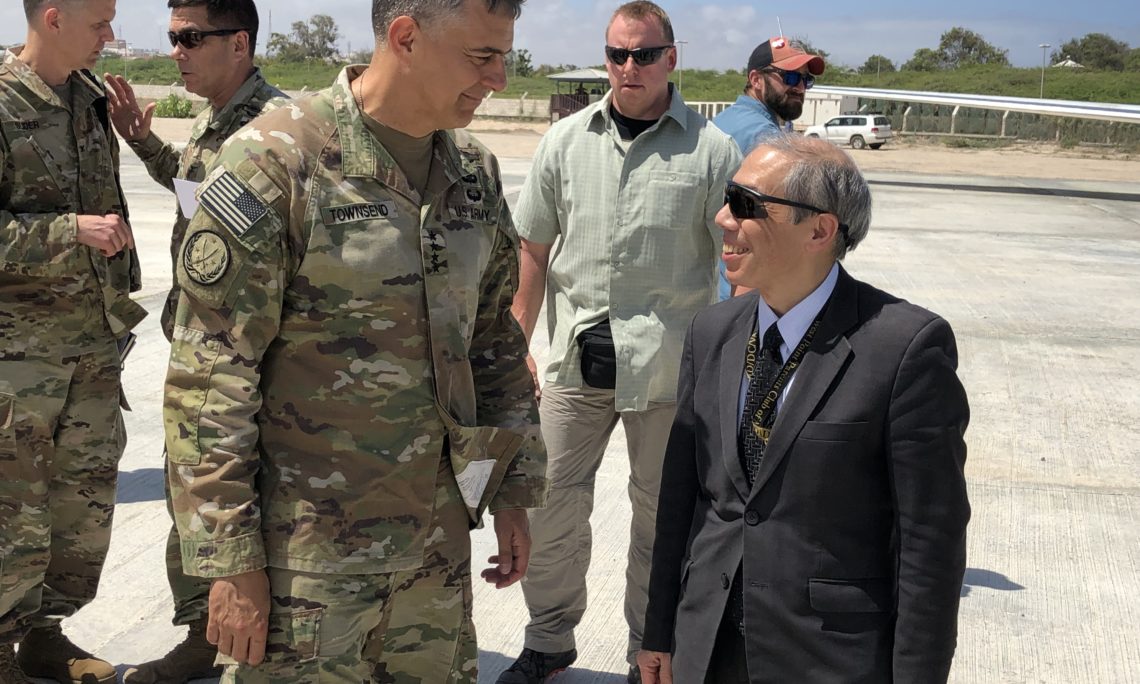 The commander of U.S. Africa Command visited Somalia on August 7 as part of his first trip to the African continent since taking command on July 26.

General Stephen Townsend met w ith the Prime Minister of Somalia, the U.S. Ambassador to Somalia, Donald Yamamoto, and senior Somali military leadership in Mogadishu. The visit offered an opportunity to assess the situation in Somalia while reinforcing U.S. Africa Command’s commitment to mutual security interests in the region.

“I am committed to working together and advancing our partnership with Somalia,” said Townsend. “Along with Somalia and other international partners, we will apply continued pressure on violent extremist organizations. This pressure creates conditions and opportunity for further political and economic development.”

U.S. efforts in Somalia involve coordinated efforts in the areas of diplomacy, development, and defense. Earlier in the week, Under Secretary of State for Political Affairs David Hale met with the Somali Prime Minister in Mogadishu reinforcing the U.S. commitment to helping Somalia with political reforms and economic development, and stabilization. He also highlighted the value of defense efforts.

“They agreed on the value of security operations to liberate areas from al-Shabaab and preparing Somali forces to take over from the African Union Mission to Somalia,” said Morgan Ortagus, U.S. Department of State spokesperson.

Since 2007, an African Union led, United Nations backed regional force in Somalia called AMISOM has assisted with security in the country. Djibouti, Burundi, Uganda, Ethiopia, and Kenya contribute forces. In all, nearly 22,000 Africans serve in AMISOM. In addition, various international participants, such as the European Union, are supporting Somali defense efforts.

“The unique level of cooperation between the multiple international efforts in Somalia has led to more effective Federal Government of Somalia security forces and their ability to conduct offensive operations,” said Col. Charles Bergman, U.S. Africa Command integrator for developing security in Somalia. “This demonstrates to the Somali people that their national Army’s capabilities to secure Somalia are growing.”

The Prime Minister added the partnership with the U.S. is key to reform and sustaining progress.

“Through our strategic partnership and support with the U.S. government, Somalia has made tangible progress in security, reconciliation, and debt relief,” said the Somali Prime Minister, Hassan Ali Khaire, adding the two nations will continue to partner meaningfully in pursuit of their bilateral interests.

An area of focus is U.S. Africa Command’s training of the Somali Security Forces, specifically the Danab, a specially trained Somali military force engaged in the fight against al-Shabaab and ISIS-Somalia.

Al-Shabaab remains the largest and deadliest terror organization in East Africa. The extremist group was responsible for a truck bombing in Mogadishu in October 2017 that killed 500 people in one of the deadliest violent extremist attacks since September 11, 2001. More recently, it was responsible for an attack in January on a hotel complex frequented by Westerners in Kenya’s capital city that left more than 20 innocent people dead. Al-Shabaab, a group with allegiance to al-Qaeda, remains the principal security challenge in Somalia and East Africa at large.

Townsend noted the importance of confronting violent extremist organizations in East Africa. He stated that while terror groups in Africa currently lack the capability, they possess the will and desire to attack the U.S. homeland and interests.

“Evil doers are out there,” said Townsend. “They are looking for an opening and an opportunity to do harm. If they could attack U.S. interests and the homeland they would. We can’t give them an opening. We must deny them that opportunity.”

While in Somalia, Townsend met with the U.S. units responsible for training the Danab. He remarked on the value of U.S. military training.

“The United States of America offers the best security partnership and training in the world,” said Townsend. “We invest in our partners, dedicating the time, energy, and commitment to make sure they are ready for any challenge.”

“We’re in the business of protecting our country from these threats,” said Townsend. “Degrading the capability of terrorists who operate here makes the entire region safer and prevents its export to other places. This is important work for our country, the Somalis, and our allies.”