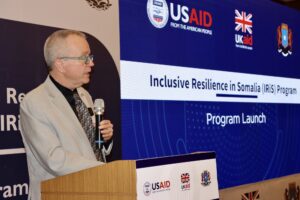 IRiS is a five-year, $65 million program focused on building the resilience of Somalis to withstand recurring climatic shocks and economic stresses. IRiS will partner with the Somali government, the private sector, and other key stakeholders to provide training and create jobs.

“Partnership – Iskashi – characterizes the relationship between the United States and Somalia.  Our shared goal is increased security, prosperity, and democracy for Somalia, leading to this nation’s full revival,” said U.S. Ambassador Larry André.

Deputy UK Ambassador Ed Barnett explained, “The UK is pleased to be partnering again with the U.S. to be able respond to Somalia’s immediate and medium-term economic resilience needs at this time.  IRiS will focus its efforts in South West State, Jubaland, and Hirshebelle, where at least one-third of Somalia’s population lives, including those most profoundly affected by the current drought.  It’s great to have here today representatives from across those three Federal Member States.”

IRiS will promote climate smart agriculture such as drought resistance seeds, support efforts to diversify livelihoods to less climate dependent options such as fishing and small businesses, and increase access to more affordable basic services such as water and electricity for marginalized communities.

Minister Mohamed Abdirahman Farah thanked the United States and the UK for their support.  “Building on the historical ties and the current cooperation and collaboration momentum, I envision the prosperity of regional development and economic stability.  I would like to congratulate USAID on hosting this launching ceremony,” the minister concluded.

IRiS is implemented by DT Global working with Mercy Corps, Save the Children, Somalia Agriculture Technical Group (SATG), and Itad.

This activity will build on current and previous USAID investments totaling more than $300 million to enhance the security and livelihoods of vulnerable communities in Somalia.