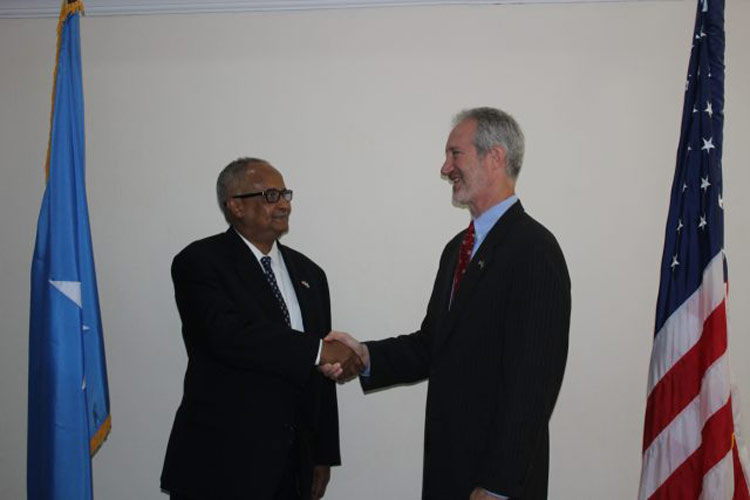 The United States Ambassador to Somalia Stephen M. Schwartz presented a copy of his letter of credence from President Barack Obama to the Minister of Foreign Affairs Dr. Abdusalam Hadliyeh Omer on August 9, 2016, at a meeting in Mogadishu. The letter of credence formally designates Ambassador Schwartz to be President Obama’s personal representative in Somalia and entitles the Ambassador to speak on behalf of the United States Government.

Following his meeting with the Minister, Ambassador Schwartz said that the appointment of an Ambassador to Somalia is a sign of the strong bonds between the two countries, and as the first U.S. Ambassador to Somalia in 25 years, he is pleased to have this opportunity to help the people of Somalia build a peaceful nation with a stable democratic government.  The Ambassador said that during his tenure he will partner with the people and government of Somalia to build representative, transparent, and effective Somali institutions that increasingly provide security, democratic governance and the rule of law, and economic growth.  Ambassador Schwartz praised the progress Somalia has made over the last eight years and urged Somali leaders to deepen their commitment to improving the lives of the Somali people, including women and youth.

Ambassador Schwartz also said that he looks forward to formally presenting his diplomatic credentials to H.E. President Hassan Sheikh Mohamud in the near future.