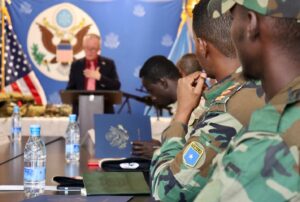 The United States presented $9 million in weapons, vehicles, medical supplies, and other equipment to the Somali National Army (SNA) in a ceremony on Sunday, January 8 attended by Minister of Defense Abdulkadir Mohamed Nur Jama and U.S. Ambassador Larry André.  Aside from heavy weapons, equipment included support and construction vehicles, explosive ordinance disposal kits, medical supplies, and maintenance equipment for vehicles and weapons.  Most of thesupplies are already on their way to Hishabelle and Galmudug States to support SNA troops.

“We cheer the success achieved by Somali security forces in their historic fight to liberate Somali communities suffering under al-Shabaab,” said Ambassador André.  “This is a Somali-led and Somali-fought campaign.  The United States reaffirms our commitment to support your effort.” 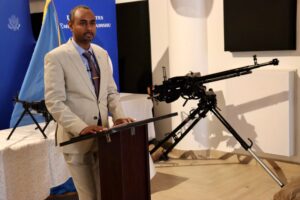 Minister of Defense Abdulkadir Mohamed Nur Jama thanked the United States, saying, “Allow me to convey the appreciation of the Federal Government of Somalia to the Government of the United States of America for the continued support to Somalia’s peacebuilding process and the support for the fight against terrorism.  This support comes at a critical time for our forcesas we boost their capabilities to combat al-Shabaab.” 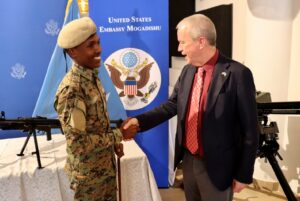 The Minister was joined by Chief of Defense Forces Brigadier General Odowaa Yusuf Rageh for the ceremony.

The weapons, including light and heavy machine guns, were purchased with U.S. Department of Defense funding.  They are marked and registered pursuant to the Federal Government of Somalia’s Weapons and Ammunition Management policy, designed to account for and control weapons within the Somali security forces and weapons captured on the battlefield.  Notification to the UN Security Council is conducted by the Federal Government of Somalia in close coordination with the Office of Security Cooperation of U.S. Embassy Mogadishu inaccordance with UN Security Council resolutions.